Sometimes even the most ill mannered people can end up doing you a favour.

I returned to Dunstanburgh on the evening of the 10th just in time for a very lacklustre sunset in a clear sky. It wasn’t what I was after but I did want to scout my position for the morning. According to the tide tables, Sunrise would be just after 5 am and should also coincide with an unusually high tide which was just what I was after for my shot. I found the spot with the Castle rising over Grey Mare Rock and marked it with the GPS so I could find it in the dark if needed. I even knew which boulder I wanted to be in my foreground.

After dark I took a few shots by Moonlight as an experiment and then, as is my way, I found a quiet spot to sleep for the night so I could be on location early in the morning.

We live in a crowded land and some places are a lot more crowded than others. There are certain locations where you can almost guarantee to meet other photographers. Most of them accept this fact with good grace and co-operation but a very small number do not.

Arriving at my chosen location North West of the Castle at about 4.30 I could see three other photographers with roughly the same idea as me. Two were quite friendly but the other one, who was right in front of the spot I had intended to set up in, with a small roll film view camera, didn’t acknowledge or return a greeting to any of us. There was an air about him that said he wanted the place all to himself.

Now as I have already mentioned, the tide on this morning was unusually high, which left not much space for anyone else. It would have been rude to go in front of his shot and to go behind would put him into our shots so the only place to go was next to him and this happens quite frequently in busy locations.

However, the way he had strewn his backpack and coat upon the shore, cut out a lot of angles and the other two photographers were in the only available spots above him on the strand. This left the waters edge, slightly left of my original plan as the only viable position.

I set the tripod up quite low in the surf and kept the camera dry in my bag while I went and had a chat with the other two photographers. One was shooting 35mm and the other had just gone digital, the conversation was quite good while we waited for the light but our silent colleague just continued to look down his nose at us like Banquo’s ghost. 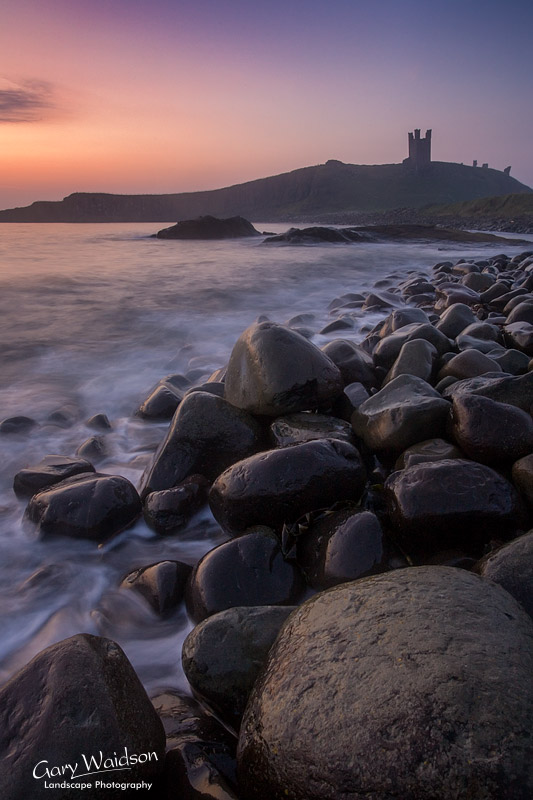 So there we all are, the tide getting higher and the light growing stronger.  Just as we all decide to start taking pictures, “Banquo” starts walking up and down the shore in front of everyone else, to where he had left his bag, not once but several times. I’m sure I could hear the other photographers grinding their teeth over the sound of the waves.

I put my camera on the tripod and shot 5 frames off in between his antics and the waves, covering it with a towel for the rest of the time, and then decided to change my location.

My legs were soaked from the breaking waves and I had ended up with the camera much closer to the water than I had intended but as a result the picture was also far stronger than the shot I had at first planned.

That was the first favour he did me that day. Had I have stayed there much longer I would  also have missed the shot from the South side of the castle too. 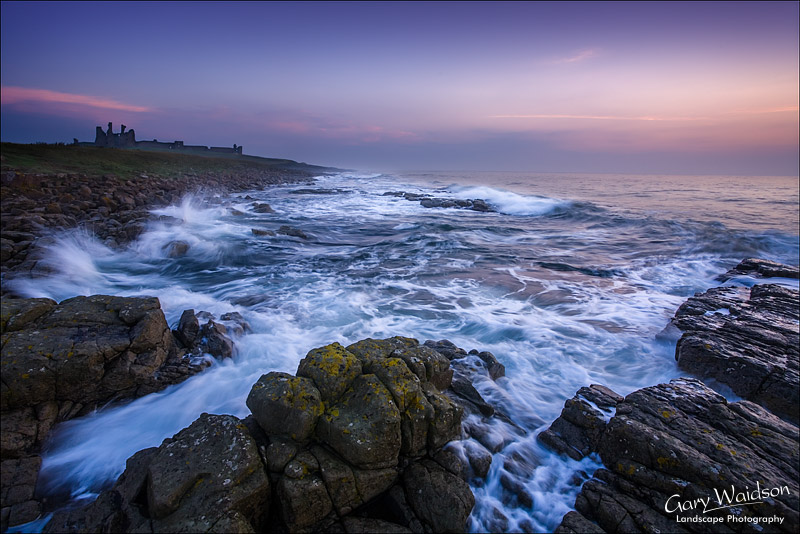 Probably the most photographed side of Dunstanburgh Castle is the one that faces the little fishing village of Craster. This is partly due to the fact that it is less distance from the car parking and many photographers seem to walk no further. I had actually expected to find that side even more crowded, but I was pleasantly surprised to find I actually had that side to myself that time morning.

The tide had all but covered Cushat Stiel but, as I was already wet, I did not worry too much about stepping out onto the remaining rocks. This gave me a foreground of foaming surf on the  the volcanic rock surfaces.

Now this is the sort of shot where digital comes into it’s own. With film you are always constrained by the cost of materials. If I had set up my 5x4 I would have exposed two sheets at most and said they were the best moments that could be taken.

On digital, I shot multiple frames, each time trying to judge the best moment to catch the waves as I wanted them. The exposure was a quarter of a second to give movement but not a compete blur to the water. Each frame had it’s strong points but in the end it was the 6th of 9 frames I chose as the best.

Despite an irritating start this was shaping up to be a good day photographically.