After such a good start at Dunstanburgh, I scouted a few new locations and then moved on to an old favourite. Now called Holy Island, as usual I prefer the old name of Lindisfarne. Something that always catches my eye as I drive over the causeway are the posts of the Pilgrims Way. 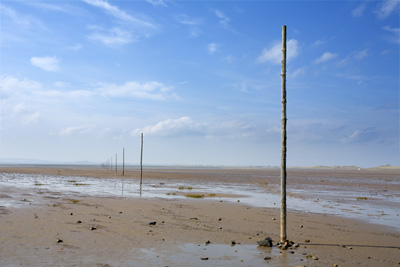 The name comes, I think, from the old route across the sands taken by pilgrims in the past but the posts have recently been replaced. I could see potential, but in the clear, strong light of early afternoon it wasn’t the shot I wanted. 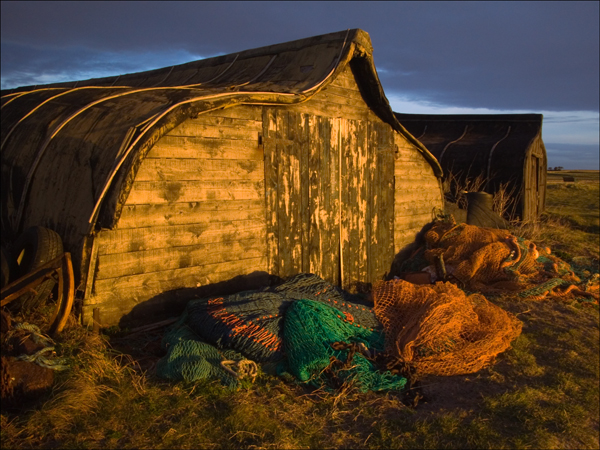 Last time I had visited the island was January 2005 and it was the harbour area that had been most productive. I wanted to see if I could get a decent shot of the castle but I also had an idea for those posts but that would have to wait till later.

The island is a lot busier in September that January not surprisingly there were a lot more visitors this time.

Twice a day Holy Island is cut off from the mainland by rising sea water and becomes an island in truth. This creates a second tidal effect on Lindisfarne amongst the tourists. Just before the causeway is cut off there is generally a mass exodus of visitors which often leaves just the residents and the photographers behind.

This day was no different. As I waited for the joint gravity of Sun and Moon to do it’s work I poked my nose around the upturned boats used as sheds in the harbour area and looked for the best angles for shooting. Quite a few of these “boat sheds” have great promise but are surrounded by clutter that does them no justice as photographic subjects. Others are just too tidy. Sometimes you just can’t win.

As the castle area quietened down it was clear that another couple of photographers were hanging about too. One was humping a heavy looking bag and tripod up and down the foreshore and the other had set himself up on Cockle Stone facing the castle and looked set to stay.

As I approached the latter. A black and white dog that had been sleeping near the bench came to check me out. It very soon became apparent that the hound and the photographer were a team the photographic half of which turned out to be a talented new photographer called Mike McFarlane who was shooting the castle for a commission. It’s worth checking out his fantastic web site as there are some lovely shots of the area to be seen there.

I checked where I could work without getting in the way and started looking for a good viewpoint. Unfortunately there is a new fence which seems to dominate the views from this side and it looked like Mike had the best alternative spot.

I was intending to stay overnight on the island and it turned out that Mike was leaving when the tide turned so I decided to go for a morning shot of the castle instead and keep my eye on the evening light for that shot I had seen of the posts. Luck favoured my choice that day because the light on the castle dissolved disappointingly as evening approached but to the West the sky was turning peachy pink and the Suns power faded behind the thin cloud.

I told Mike I was going for another shot and as he was packing to go he decided to come with me. 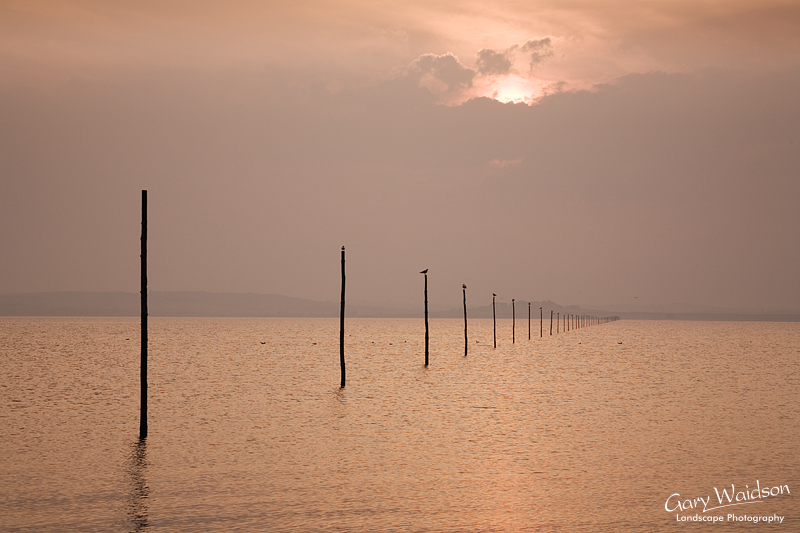 To say I was pleased with my decision would be putting it mildly. I particularly liked the way the birds had perched on all the posts except the one nearest to us and the gentle light made the scene quite ethereal. Mike very politely tried to resist taking a shot himself until I said I really didn’t mind and his finished shot of this is quite different but great too.

So Mike made his way home and I stayed on the island for the night so I could give the castle a try in the morning.

I can’t make my mind up about Lindisfarne Castle. I’ve seen a few good shots of it but without copying them wholesale, I have yet to get anything myself that I’m entirely happy with.

The dawn was hampered by a bank of cloud out to sea which obscured the sun during it’s rise and left the low clouds a dusty grey against a soft pink upper cloud layer.

The light level was low so I decided to try and get some drama out of the waves rushing around the rocks of the Cockle Stone area with the castle behind.

The result I would say falls into the middle ground. It’s better than my earlier attempts but, to me,  still lacks the magic that a really good shot needs.

For me It’s not quite there yet. I can see the potential but I’ve not captured the essence of this place yet. I guess that’s as good an excuse as any to return to this atmospheric corner of our land.

I revisit known locations quite often even after getting a good result. It is the nature of landscape photography that the light changes constantly.

Even if you visit the same spot at the same time of year it is very rare that you will come away with the same type of shot. 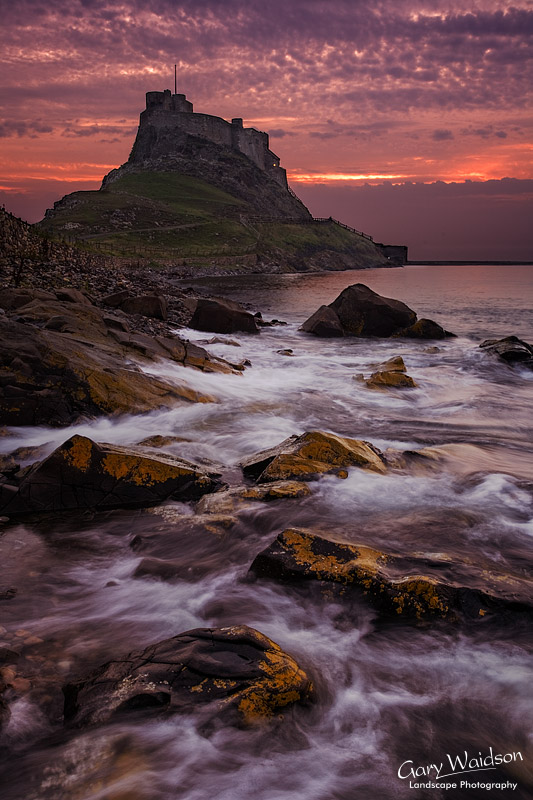