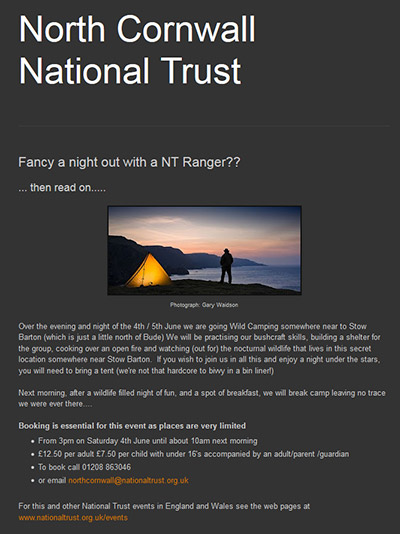 The Great National Trust Rip Off

People often ask me why I am rather critical of the National Trust in these pages. Well, it’s a sad fact that I constantly have to monitor and police the use of my images on the web.

Lots of people seem to think that just because something has been posted on the internet, it must be free for them to use as they like.

This is not the case. Content that is less than one hundred years old is automatically covered by copyright.

I use various methods to find such offenders and usually it is individuals that simply do not understand the law.

Imagine my surprise then to discover that the National Trust, one of the largest conservation organisations in the UK, with a very large legal department, had stolen one of my images to promote one of it’s own paid events. Not just once but twice!

I discovered this in June 2012 and on further research found that they had used the same picture to advertise their event, evidently successfully because they were doing it again,  the year before.

I immediately contacted them  of course and received a weak apology saying:

“The person responsible who looks after that area's social media websites would like to offer his apologies and would like to say that it was a genuine mistake and was not done in any way deliberately.”

How do you take someone’s work and post it in your advert without being deliberate about it? 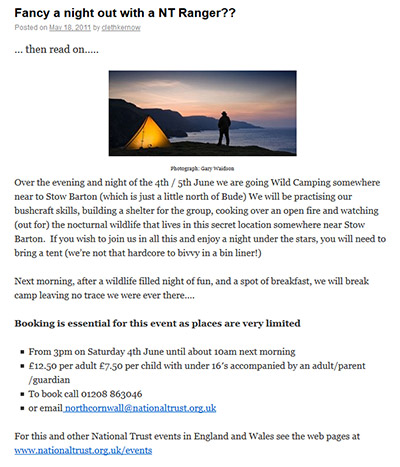 They knew perfectly well who I was because they put my name under it and I’m certainly not that hard to find on a search engine and I have worked for them in the past so there is no way that they could claim this as an orphaned work, but they did not try to contact me for permission of any kind.

They went on to say:

“I would just like to say that we do take this matter very seriously as our usual practise is very tight indeed and intellectual property rights are very much respected.”

There was not much sign of that respect in this case though.

Their own web site makes it very clear that they will deal severely with anyone that steals any of their pictures of course and yet absolutely no offer of compensation was ever made to me.

I chose not to pursue the matter further in this case because it would have involved a long costly legal battle to fight their army of lawyers.

But, I doubt if I’ll ever have a good word to say for the National Trust again...