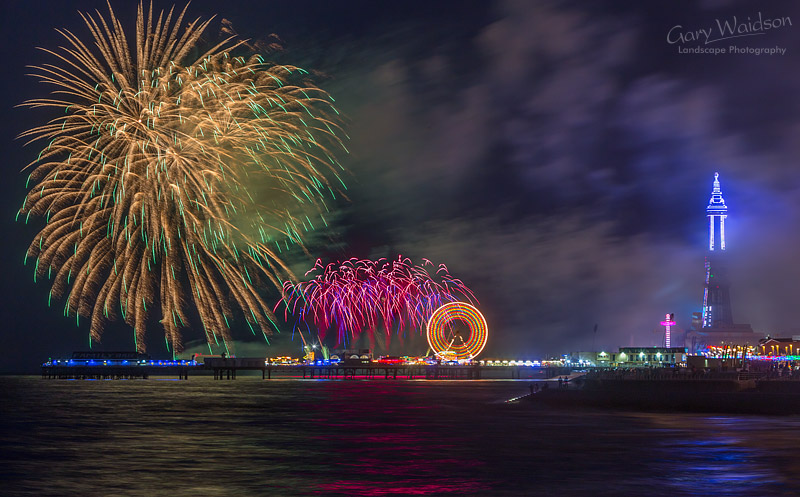 It’s been a long time since I tried any firework shots, the last ones were on Film in Paris back in the 80s.

Then it was largely down to luck and a fair wind but the feedback available from modern digital cameras makes the job a lot easier. 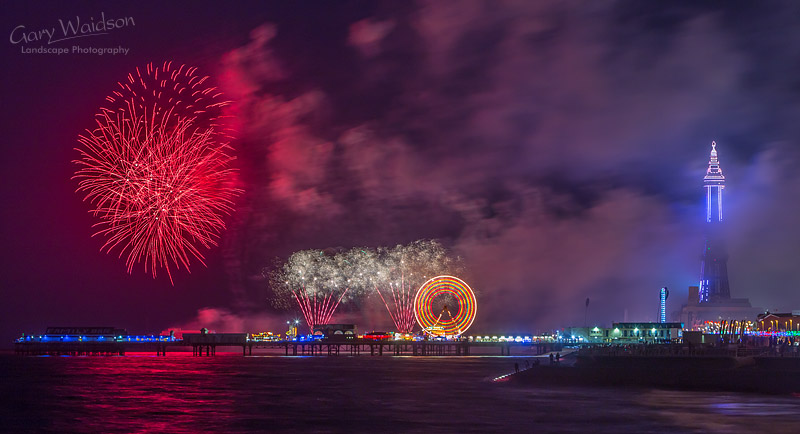 We took a day around the town to revisit some old memories and also case the joint to work out where the best shots could be had.

Some quick enquiries revealed that the fireworks are launched from the North Pier so we took a look and saw that there were two main launch sites. Mid pier they were setting up a bank of relatively low altitude pyro and the big launchers were at the end.

This gave me a good idea of the shape of the display which was oriented for the public on the nearby promenade. That wasn’t where I wanted to be. 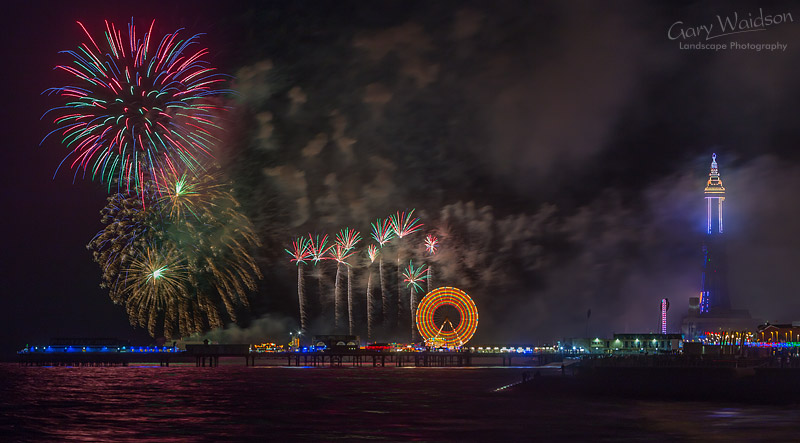 I knew the tide would be in for this first display so I figured shooting from one of the other piers might give me some interesting reflections in the water. We checked out the Central Pier and soon decided that there was too much movement caused by the public on the board-walk. the South Pier, which had been my preferred option also suffered the same problem.

The new promenade really is a fine piece of architecture. Well thought out for how people use such spaces while also serving an important purpose as sea defences. The sea wall snakes along the shore with curves that defuse the power of the waves but also provide slight promontories which would suit my needs perfectly.

I wanted the tower in shot to balance the composition, even though unfortunately it is currently undergoing restoration which means some of it is under cover. This gave me an optimum position near the South Pier. This also had the advantage of being far from the main crowds.

All I had to do was establish the best exposure for the fixed illuminations as a starting point and then wait for the first bursts of the display to check I had good settings for the fireworks. 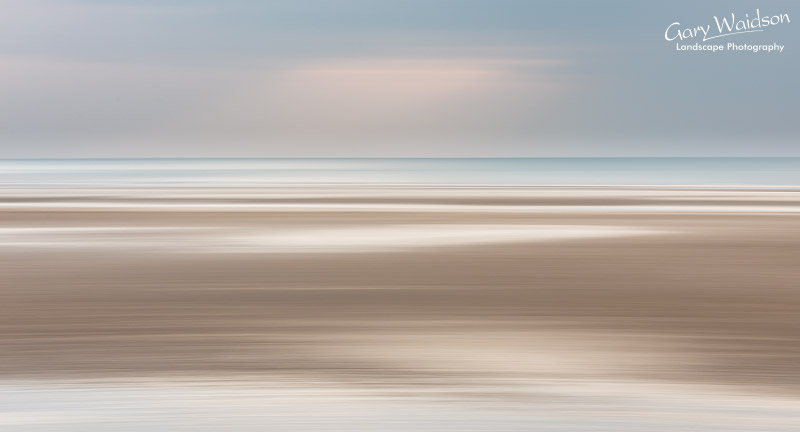 For the next display, the week following, the tide was going to be out. That gave me the chance to move onto the beach for a different viewpoint.

I arrived early to get a good parking spot which gave me some time to kill which I used to experiment with some intentional camera movement. another thing I have not done since film. Much less guesswork needed with digital I must say.

I still wanted reflections for my foreground so I had to find a patch on the beach that would not drain fully. 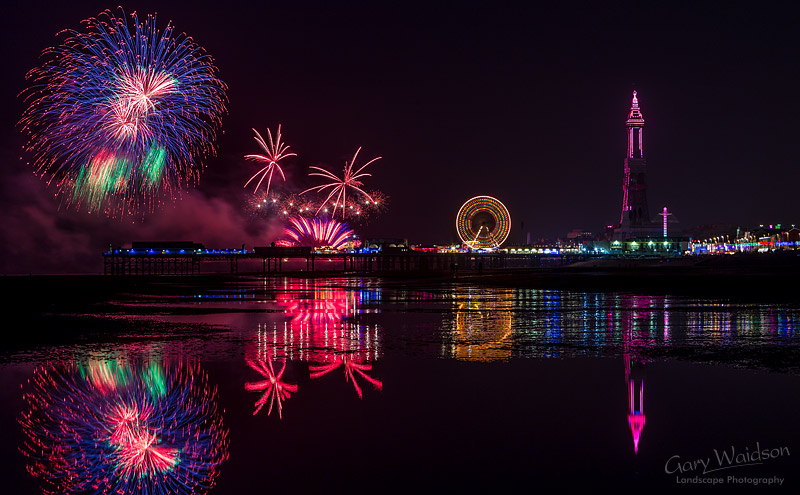 On the previous display there had been an onshore breeze which swept the shoke towards the illuminations adding atmosphere which I quite liked. This time the breeze was offshore which I’m not so sure about. 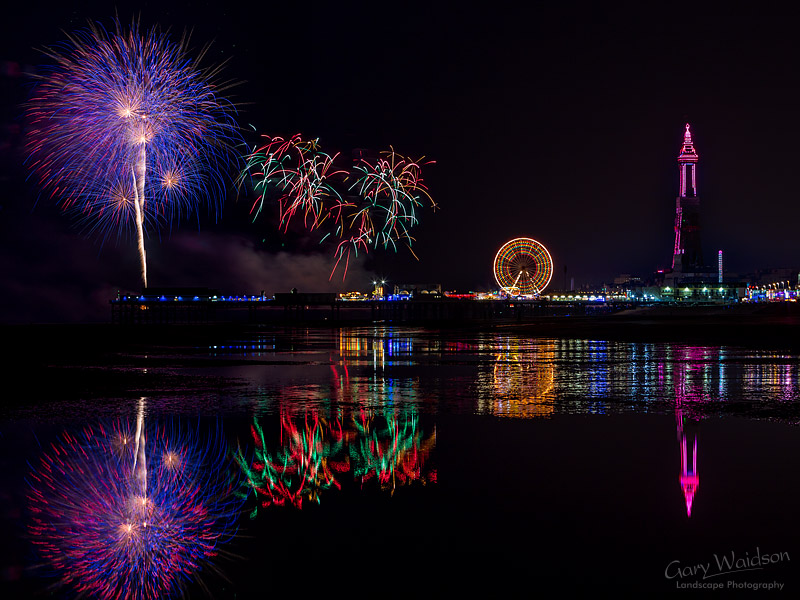 The display format was much the same but I had the impression that there was less colour. I think this team were trying to be arty with mostly white pyro which may have looked great from the main crowd position but looked a little weak from the South Beach.

It must be very difficult to plan a display for such a wide viewing arc I guess. 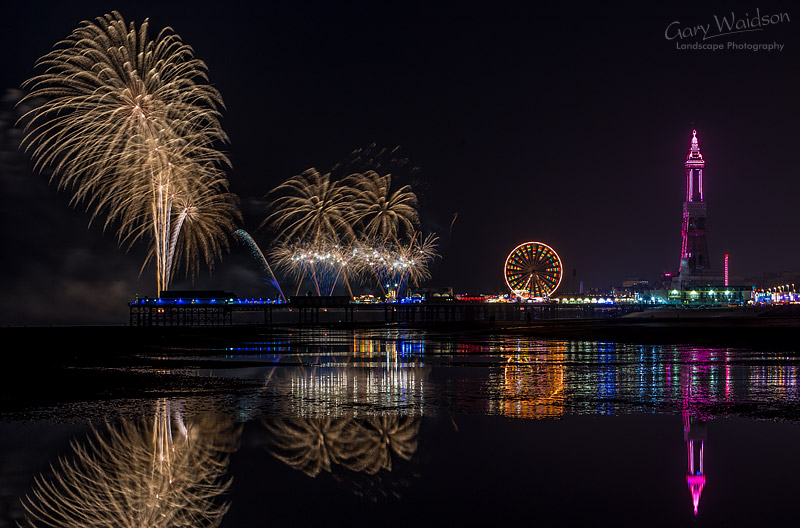 ( I visited this competition again in 2018 when the restoration work on the tower had been completed. See the pictures here.  )